Gary: I guess it’s obvious that I have always enjoyed music, but I also like to dance. and I guess, I’m not bad at it.  Well here are 3 songs that I just loved to dance to: “This Time“, “Need You” and “Love You So“.

The first one, Russ would say is a great “Grinding” Song. 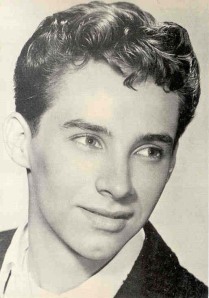 Troy, who plays organ, guitar, trumpet, sax and drums, attended Valparaiso University in Valparaiso, Indiana, where he majored in Music.  In the summer of 1961, he recorded and produced a song called “This Time” in a small Fort Wayne recording studio.  He released it on his own label, Gold Crest Records.

Chicago disc jockeys, Stan Major and Jim Lounsbury liked the song and brought it to the attention of Liberty records, who in turn bought the master and released it on their label.  This was his biggest hit.

Another grinder for Russ…

There are no photos and very little data on Donnie Owens, so I will give you what I know.

Donnie Owens: Born October 30, 1938: His Country-flavored style was a cross between Elvis and Conway Twitty.  His only hit, “Need You“, might have been a bigger hit if Conway’s “It’s Only Make Believe” had not been out at exactly the same time. Original 45 features Duane Eddy on guitar.

If anyone reading this has a photo of Donnie, it would be appreciated.

Ron Holden’s home town was Seattle Washington.  His mother and father, as well as his eight brothers and sisters, were all musicians.  During his High School Years Ron played with a group called The Thunderbirds.

In early 1960, he signed with Donna records and recorded a song he wrote called “Love You So“, which became his only major hit.