When I was in my Mid-Teens there was a song that had an influence on the way I dressed.  It was done by a cross-over Country star, who would go on to great things in the Country field.

But for this Blog I will only deal with his time in the Country and Pop Field.  The Song “White Sports Coat and a Pink Carnation” prompted me to purchase one and the same. 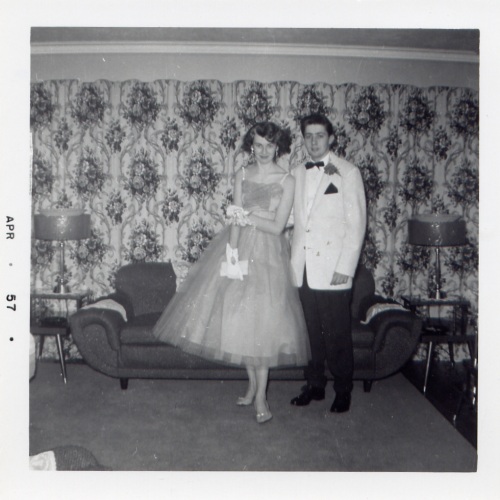 This is just a Great Video from the Grand Old Opry, which shows that Marty could really Rock!

Martin David Robinson 26 September 1925, near Glendale, Arizona, USA, d. 8 December 1982, Nashville, Tennessee, USA. Robbins later maintained that his father hated him and that his early childhood was unhappy. Reports indicate that John Robinson (originally a Polish immigrant named Mazinski) suffered from a drink problem that led to him abusing his family before eventually leaving his wife, Emma, to cope alone with their seven children plus the two from her previous marriage.

At one time they lived in a tent in the desert, but in 1937 his parents divorced and Emma and the children moved to a shack in Glendale, where she took in laundry to support the family.

In his early teens, Marty spent some time with an elder brother breaking wild horses on a ranch near Phoenix. Consequently his education suffered; he attended high school in Glendale but never graduated, and by the early 1940s he was becoming involved in a life of petty crime.

He left home to live the life of a hobo until he joined the US Navy in May 1943. It was during his three years in the service, where he saw action in the Pacific, that he learned to play the guitar and first started songwriting and singing. He also acquired a love of Hawaiian music that would surface several times during his career.

After discharge in February 1946, he returned to Glendale, where he tried many jobs before starting to sing around the clubs and on local radio under the names of either Martin or Jack Robinson (his mother strongly disapproved of him singing in clubs and he used the name ‘Jack’ to try to prevent her finding out).

By 1950, he had built a local reputation and was regularly appearing on KTYL Mesa and on both radio and in his own television show, Western Caravan, on KPHO Phoenix.

He married Marizona Baldwin on 27 September 1948, a marriage that lasted until Marty’s death. A son, Ronald Carson Robinson, was born in 1949 and 10 years later, their daughter Janet was born (Son Ronald eventually became a singer, performing both as “Ronnie Robbins” and as “Marty Robbins Jr”.)

Through the assistance of Little Jimmy Dickens, and by now known as “Marty Robbins”, he was signed by Columbia Records, for whom he first recorded in November 1951.

In December 1952, ‘I’ll Go On Alone’ became his first US Country hit. It charted for 18 weeks, two of which were spent at #1. Marty wrote the song because initially his wife disliked his show business life.

He moved to Nashville in January 1953 and became a member of the Grand Ole Opry. Early in his career, he acquired the nickname of ‘Mr Teardrop’ and later wrote and recorded a song with that title.

In 1955, his career, which by the end of 1954 appeared somewhat becalmed, received a welcome boost with the success of his recordings of rockabilly numbers, ‘That’s All Right’ (originally written and recorded by Arthur ‘Big Boy’ Crudup in 1947 but more recently a hit for Elvis Presley) and ‘Maybellene’ both became Top 10 country hits.

He had always realized that it would be advantageous to record in differing styles and, accordingly, his recordings varied from Country to Pop, from Hawaiian to Gospel, and even some with his own guitar providing the sole accompaniment.

In 1956, he achieved another Country #1 with his version of Melvin Endsley’s ‘Singing The Blues’. The song also made #17 in the US pop charts, where Guy Mitchell’s version was #1.

The following year, Marty turned Endsley’s song ‘Knee Deep In The Blues’ into a #3 Country hit but again lost out in the Pop charts to Mitchell, who had immediately covered Robbins’ recording.

Somewhat frustrated, Robbins made his next recordings in New York with Ray Conniff and his orchestra and during 1957/8, with what may be best termed teenage love songs, he registered three more country #1’s with his own song, ‘A White Sports Coat (And A Pink Carnation)’ (a million-seller), the Hal David – Burt Bacharach song, ‘The Story Of My Life’ and ‘Stairway Of Love’. The first two were also major US Pop hits for him (in the UK, the former was a hit for the King Brothers and Terry Dene, while Michael Holliday had Top 3 successes with the latter two).

During the late 50s, he formed a talent and booking agency and launched his own record label. Robbins had always had a love of the Old West. He always considered the cowboy state of Arizona to be his home (his maternal grandfather had once been a Texas Ranger), and in the late 50s he appeared in three B-movie Westerns, Raiders Of Old California, Badge Of Marshal Brennan and Buffalo Gun. The first two were straight acting roles but the latter co-starred Webb Pierce and Carl Smith and included several songs.

It was also at this time that he began to record the material that would see release on albums such as his now legendary Gunfighter Ballads And Trail Songs (he actually recorded the whole album in one day).

In 1959, he wrote and charted the title track of the film The Hanging Tree, which starred Gary Cooper, before his classic ‘El Paso’ became a #1 Country and Pop hit. It gave him a second million-seller and was also the first Country music song to be awarded a Grammy. The success of this song established Robbins once and for all and songs such as ‘Big Iron’ and ‘Running Gun’ became firm favourites with audiences the world over.

During the 60s, he registered 31 US Country hits, 13 of which also found success in the Pop charts. The Country #1’s included ‘Don’t Worry’ (which has the distinction of being the first song to include the ‘fuzz’ sound on the recording: a fuse had blown in the control room channel carrying Grady Martin’s lead guitar, with the result that it sounded fuzzy – Robbins liked the effect and left it in), ‘Devil Woman’ (a UK Top 5 pop hit for him), ‘Ruby Ann’, ‘Ribbon Of Darkness’, ‘Tonight Carmen’ and ‘I Walk Alone’.

In 1964, Robbins supported Barry Goldwater in his bid for President and also wrote ‘Ain’t I Right’ and ‘My Own Native Land’, two protest songs against Communism and anti-American war protesters. He felt the first would be a hit but Columbia, fearing racial repercussions, would not let him release them. However, his guitarist and backing vocalist Bobby Sykes’ recordings of the songs were released on the Sims label. He used the pseudonym Johnny Freedom, but sounded so much like his boss that for years many people have believed the recordings were by Robbins himself (Robbins’ own recordings were later released by Bear Family on the album Pieces Of Your Heart).

Robbins later portrayed a musician in the 1982 Clint Eastwood film Honkytonk Man. Robbins died a few weeks before the film’s release in December 1982 of complications following cardiac surgery. At the time of his death, Robbins lived in Brentwood in Williamson County, outside Nashville. He was interred in Woodlawn Memorial Park in Nashville. The city of El Paso, Texas later honored Robbins by naming a park and a recreational center after him.