I cannot believe I missed doing a post on this man.  I talked to Russ and he confirmed, yes you somehow missed him.  OK, so here goes.  I guess two of my all-time favourite songs, one in 1963 and one in 1964 were recorded by him.  They were both written by the Motown “Machine Writers” Holland, Dozier and Holland. As usual they were not his biggest hits and as usual, I tend to pick for my favourite songs that were not # 1.  He was good looking, extremely talented, but had a very troubled life with a disastrous end.  He was a singer, songwriter, producer and even did a little acting in movies, let’s look at the troubled life of a man that sold over One Hundred Million Records! 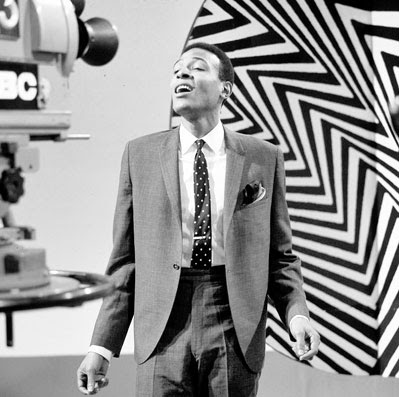 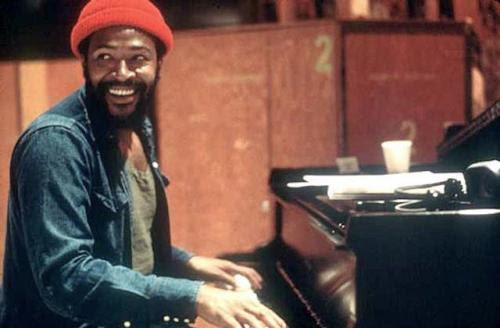 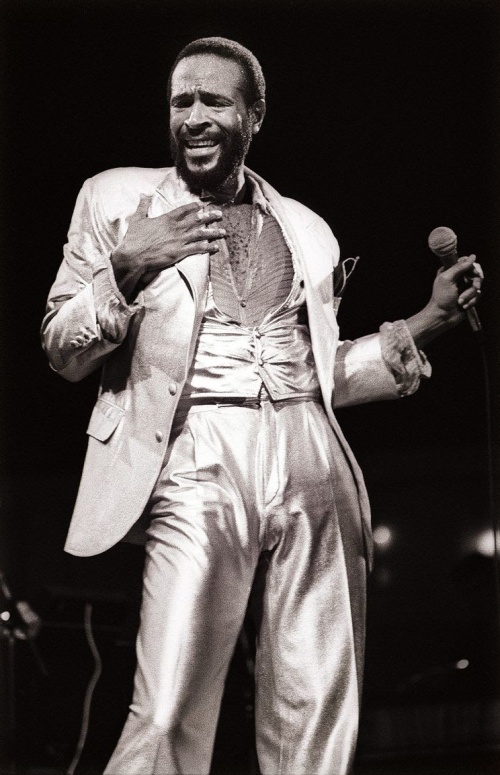 1980 / I Heard it through the Grapevine / Montreux Jazz Festival /

(There are just too many songs, so I have chosen a few of “My” Favourites)…

Marvin Pentz Gay, Jr. (in the style of his hero Sam Cooke, he added the “e” to his surname as an adult) was born April 2, 1939, in Washington, D.C. The second of three children born to the Reverend Marvin Gay, Sr., an ordained minister in the House of God — a conservative Christian sect that fuses elements of orthodox Judaism and Pentecostalism, imposes strict codes of conduct, and observes no holidays — he began singing in church at the age of three, quickly becoming a soloist in the choir. Gaye later took up piano and drums, and music became his escape from the nightmarish realities of his home life — throughout his childhood, his father beat him on an almost daily basis.

After graduating from high school, Gaye enlisted in the U.S. Air Force; upon his discharge, he returned to Washington and began singing in a number of street-corner doo wop groups, eventually joining the Rainbows, a top local attraction. With the help of mentor Bo Diddley, the Rainbows cut “Wyatt Earp,” a single for the OKeh label that brought them to the attention of singer Harvey Fuqua, who in 1958 recruited the group to become the latest edition of his backing ensemble, the Moonglows. After relocating to Chicago, the Moonglows recorded a series of singles for Chess, including 1959’s “Mama Loocie.” While touring the Midwest, the group performed in Detroit, where Gaye‘s graceful tenor and three-octave vocal range won the interest of fledgling impresario Berry Gordy, Jr., who signed him to the Motown label in 1961.

While first working at Motown as a session drummer and playing on early hits by Smokey Robinson & the Miracles, he met Gordy‘s sister Anna, and married her in late 1961. Upon mounting a solo career, Gaye struggled to find his voice, and early singles failed. Finally, his fourth effort, “Stubborn Kind of Fellow,” became a minor hit in 1962, and his next two singles — the 1963 dance efforts “Hitch Hike” and “Can I Get a Witness” — both reached the Top 30. With 1963’s “Pride and Joy,” Gaye scored his first Top Ten smash, but often found his role as a hit maker stifling — his desire to become a crooner of lush romantic ballads ran in direct opposition to Motown’s all-important emphasis on chart success, and the ongoing battle between his artistic ambitions and the label’s demands for commercial product continued throughout Gaye‘s long tenure with the company.

With 1964’s Together, a collection of duets with Mary Wells, Gaye scored his first charting album; the duo also notched a number of hit singles together, including “Once Upon a Time” and “What’s the Matter With You, Baby?” As a solo performer, Gaye continued to enjoy great success, scoring three superb Top Ten hits — “Ain’t That Peculiar,” “I’ll Be Doggone,” and “How Sweet It Is (To Be Loved by You)” — in 1965. In total, he scored some 39 Top 40 singles for Motown, many of which he also wrote and arranged. With Kim Weston, the second of his crucial vocal partners, he also established himself as one of the era’s dominant duet singers with the stunning “It Takes Two.”

However, Gaye‘s greatest duets were with Tammi Terrell, with whom he scored a series of massive hits penned by the team of Nickolas Ashford and Valerie Simpson, including 1967’s “Ain’t No Mountain High Enough” and “Your Precious Love,” followed by 1968’s “Ain’t Nothing Like the Real Thing” and “You’re All I Need to Get By.” The team’s success was tragically cut short in 1967 when, during a concert appearance in Virginia, Terrell collapsed into Gaye‘s arms on-stage, the first evidence of a brain tumour that abruptly ended her performing career and finally killed her on March 16, 1970. Her illness and eventual loss left Gaye deeply shaken, marring the chart-topping 1968 success of “I Heard It Through the Grapevine,” his biggest hit and arguably the pinnacle of the Motown sound.

At the same time, Gaye was forced to cope with a number of other personal problems, not the least of which was his crumbling marriage. He also found the material he recorded for Motown to be increasingly irrelevant in the face of the tremendous social changes sweeping the nation, and after scoring a pair of 1969 Top Ten hits with “Too Busy Thinking About My Baby” and “That’s the Way Love Is,” he spent the majority of 1970 in seclusion, resurfacing early the next year with the self-produced What’s Going On, a landmark effort heralding a dramatic shift in both content and style that forever altered the face of black music. A highly percussive album that incorporated jazz and classical elements to forge a remarkably sophisticated and fluid soul sound, What’s Going On was a conceptual masterpiece that brought Gaye‘s deeply held spiritual beliefs to the fore to explore issues ranging from poverty and discrimination to the environment, drug abuse, and political corruption; chief among the record’s concerns was the conflict in Vietnam, as Gaye structured the songs around the point of view of his brother Frankie, himself a soldier recently returned from combat.

The ambitions and complexity of What’s Going On baffled Berry Gordy, who initially refused to release the LP; he finally relented, although he maintained that he never understood the record’s full scope. Gaye was vindicated when the majestic title track reached the number two spot in 1971, and both of the follow-ups, “Mercy Mercy Me (The Ecology)” and “Inner City Blues (Make Me Wanna Holler),” also reached the Top Ten. The album’s success guaranteed Gaye continued artistic control over his work and helped loosen the reins for other Motown artists, most notably Stevie Wonder, to also take command of their own destinies. Consequently, in 1972, Gaye changed directions again, agreeing to score the Blaxploitation thriller Trouble Man; the resulting soundtrack was a primarily instrumental effort showcasing his increasing interest in jazz, although a vocal turn on the moody, minimalist title track scored another Top Ten smash.

The long-simmering eroticism implicit in much of Gaye‘s work reached its boiling point with 1973’s Let’s Get It On, one of the most sexually charged albums ever recorded; a work of intense lust and longing, it became the most commercially successful effort of his career, and the title cut became his second number one hit. Let’s Get It On also marked another significant shift in Gaye‘s lyrical outlook, moving him from the political arena to a deeply personal, even insular stance that continued to define his subsequent work. After teaming with Diana Ross for the 1973 duet collection Marvin and Diana, he returned to work on his next solo effort, I Want You; however, the record’s completion was delayed by his 1975 divorce from Anna Gordy. The dissolution of his marriage threw Gaye into a tailspin, and he spent much of the mid-’70’s in divorce court. To combat Gaye‘s absence from the studio, Motown released the 1977 stopgap Live at the London Palladium, which spawned the single “Got to Give It Up, Pt. 1,” his final number one hit.As a result of a 1976 court settlement, Gaye was ordered to make good on missed alimony payments by recording a new album, with the intention that all royalties earned from its sales would then be awarded to his ex-wife. The 1978 record, a two-LP set sardonically titled Here, My Dear, bitterly explored the couple’s relationship in such intimate detail that Anna Gordy briefly considered suing Gaye for invasion of privacy. In the interim, he had remarried and begun work on another album, Lover Man, but scrapped the project when the “Ego Tripping Out” lead single — a telling personal commentary presented as a duet between the spiritual and sexual halves of his identity, which biographer David Ritz later dubbed the singer’s “divided soul” — failed to chart. As his drug problems increased and his marriage to new wife Janis also began to fail, he relocated to Hawaii in an attempt to sort out his personal affairs.In 1981, longstanding tax difficulties and renewed pressures from the IRS forced Gaye to flee to Europe, where he began work on the ambitious In Our Lifetime, a deeply philosophical record that ultimately severed his longstanding relationship with Motown after he claimed the label had remixed and edited the album without his consent. Additionally, Gaye stated that the finished artwork parodied his original intent, and that even the title had been changed to drop an all-important question mark. Upon signing with Columbia in 1982, he battled stories of erratic behaviour and a consuming addiction to cocaine to emerge triumphant with Midnight Love, an assured comeback highlighted by the luminous Top Three hit “Sexual Healing.” The record made Gaye a star yet again, and in 1983 he made peace with Berry Gordy by appearing on a television special celebrating Motown’s silver anniversary. That same year, he also sang a soulful and idiosyncratic rendition of “The Star-Spangled Banner” at the NBA All-Star Game; it instantly became one of the most controversial and legendary interpretations of the anthem ever performed. And it was to be his final public appearance. Gaye‘s career resurgence brought with it an increased reliance on cocaine; finally, his personal demons forced him back to the U.S., where he moved in with his parents in an attempt to regain control of his life. Tragically, the return home only exacerbated his spiral into depression; he and his father quarreled bitterly, and Gaye threatened suicide on a number of occasions. Finally, on the afternoon of April 1, 1984 — one day before his 45th birthday — Gaye was shot and killed by Marvin Sr. in the aftermath of a heated argument. In the wake of his death, Motown and Columbia teamed up to issue two 1985 collections of outtakes, Dream of a Lifetime — a compilation of erotic funk workouts teamed with spiritual ballads — and the big band-inspired Romantically Yours. (Vulnerable, a collection of ballads that took over 12 years to complete, finally saw release in 1996.) With Gaye‘s death also came a critical re-evaluation of his work, which deemed What’s Going On to be one of the landmark albums in pop history, and his 1987 induction into the Rock & Roll Hall of Fame permanently enshrined him among the pantheon of musical greats.