This Group was founded as the Primettes from the Brewster Douglas Public Housing Project in Detroit.  They started with Betty, Florence, Mary and Diana and would end up with just Florence Ballard, Mary Wilson (Gary’s choice for the best singer) and Diana Ross.  They were not a huge favourite of mine, but I loved some of their songs.

In June of 1966, I was in attendance at the O’Keefe Centre in Toronto for an evening with the Supremes, I still have the program which of course is now 53 years old.  I now live only 45 kms from Detroit and next month my friend David is coming from Toronto and will we go to the Motown Museum, Dinner and then to the famous Fisher Theatre to see “Pride and Joy” the Marvin Gaye Story.

They would lose Florence from the group in 1967 (she passed in 1976) and would add Cindy Birdsong.

With Florence and then with Cindy 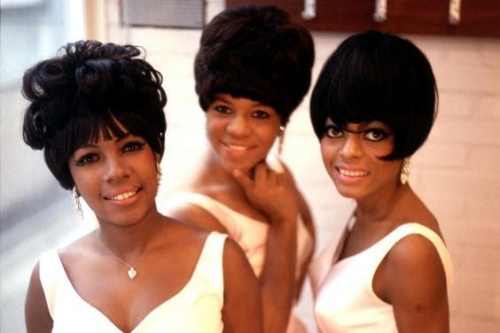 Best of the Ed Sullivan Show /

Ed Sullivan last performance / Someday we will be together /

(there are literally so many songs so I have just picked just a few)  If I have missed some of your favourites, I apologize.

That’s just 9 songs, but as you can see, they sold a lot of vinyl for Barry Gordy.

America’s most successful female vocal group of all time was formed by four Detroit schoolgirls in the late 50’s. Diana Ross (26 March 1944, Detroit, Michigan, USA), Betty McGlown (b. 1943, Detroit, Michigan, USA), Florence Ballard (b. 30 June 1943, Rosetta, Mississippi, USA, d. 22 February 1976, Detroit, Michigan, USA) and Mary Wilson (b. 6 March 1944, Greenville, Mississippi, USA) named themselves the Primettes in tribute to the local male group, the Primes – who themselves found fame in the 60s as the Temptations. Having issued a solitary single on a small local label, the Primettes were signed to Berry Gordy’s Motown Records stable, with Barbara Martin replacing McGlown and an enforced name change to the Supremes. The group initially found public acceptance hard to find. For more than two years, they issued a succession of flop singles, despite the best efforts of top Motown writer/producer Smokey Robinson to find them a suitable vehicle for their unsophisticated talents.

The departure of the pregnant Martin reduced the line-up to a trio, but it was only when Ross supplanted Ballard as the group’s regular lead vocalist, at Gordy’s suggestion, did the Supremes break into the US charts. The dynamic ‘When The Love light Starts Shining Through His Eyes’, written by the newly formed Holland/Dozier/Holland writing and production team and modelled on the production style of Phil Spector, was the group’s first hit in December 1963. The follow-up single ‘Run, Run, Run’ flopped, but then Holland/Dozier/Holland concocted the slight, but effervescent, ‘Where Did Our Love Go’ for the group, which topped the US charts and was also a major hit in Britain. This achievement inaugurated a remarkable run of successes for the group and their producers, as their next four releases – ‘Baby Love’, ‘Come See About Me’, ‘Stop! In The Name Of Love’ and ‘Back In My Arms Again’ – all topped the US singles charts, while ‘Baby Love’ became the only record by an American group to reach number 1 in Britain during the beat-dominated year of 1964. All these singles were hinged around insistent, very danceable rhythms with repetitive lyrics and melodies, which placed no great strain on Ross’ fragile voice. With their girl-next-door looks and endearingly unsophisticated demeanour, the Supremes became role models for young black Americans and their name was used to promote a range of merchandising, even (ironically) a brand of white bread.

The rather perfunctory ‘Nothing But Heartaches’ broke the chart-topping sequence, which was immediately restored by the more ambitious ‘I Hear A Symphony’. As Holland/Dozier/Holland moved into their prime, and Ross increased in confidence, the group’s repertoire grew ever more mature. They recorded albums of Broadway standards, played residencies at expensive nightclubs, and were expertly groomed by Motown staff as all-round entertainers. Meanwhile, the hits kept coming, with four more US number 1 hits between 1966 and 1967 in the shape of ‘You Can’t Hurry Love’, ‘You Keep Me Hangin’ On’, ‘Love Is Here And Now You’re Gone’ and ‘The Happening’, the last of which was a blatant attempt to cash in on the psychedelic movement.

Behind the scenes, the group’s future was in some jeopardy; Florence Ballard had grown increasingly unhappy in the supporting role into which Berry Gordy had coerced her, and her occasionally erratic and troublesome behaviour was ultimately used as an excuse to force her out of the group. Without fanfare, Ballard was ousted in mid-1967, and replaced by Cindy Birdsong (b. Cynthia Ann Birdsong, 15 December 1939, Mount Holly Township, New Jersey, USA); most fans simply did not notice. At the same time, Ross’ prime position in the group’s hierarchy was confirmed in public, when she was given individual credit on the group’s records, a move that prompted a flurry of similar demands from the lead singers of other Motown groups.

The 1967 single ‘Reflections’, an eerie, gripping song that was one of Motown’s most adventurous productions to date, introduced the new era of Diana Ross And The Supremes. Motown’s loss of Holland/Dozier/Holland slowed the group’s progress in 1968, before they bounced back with two controversial slices of overt social commentary, ‘Love Child’ and ‘I’m Livin’ In Shame’, the first of which was yet another US number 1. The Supremes also formed a successful recording partnership with the Temptations, exemplified by the hit single ‘I’m Gonna Make You Love Me’. During 1969, there were persistent rumours that Berry Gordy was about to launch Diana Ross on a solo career. These were confirmed at the end of the year, when the Supremes staged a farewell performance, and Ross bade goodbye to the group with the elegiac ‘Someday We’ll Be Together’ – a US chart-topper on which, ironically, she was the only member of the Supremes to appear.

Ross was replaced by Jean Terrell (b. Velma Jean Terrell, 26 November 1944, Belzoni, Mississippi, USA), sister of heavyweight boxer Ernie Terrell. The new line-up, with Terrell and Mary Wilson alternating lead vocal duties, found immediate success with ‘Up The Ladder To The Roof’ in early 1970, while ‘Stoned Love’, the group’s biggest UK hit for four years, revived memories of their early successes with its rhythmic base and repetitive hook. The Supremes also tried to revive the atmosphere of their earlier recordings with the Temptations on a series of albums with the Four Tops. Gradually, their momentum was lost, and as Motown shifted its centre of activity from Detroit to California, the Supremes were left behind.

Lynda Laurence (b. Lynda Tucker, 20 February 1944, Philadelphia, Pennsylvania, USA) replaced Cindy Birdsong in the line-up in 1972; Birdsong returned in 1974 when Laurence became pregnant. The latter move coincided with the departure of Jean Terrell, whose place was taken by Scherrie Payne (b. 14 November 1944, Detroit, Michigan, USA). With the group recording only rarely, Birdsong quit again, leaving Mary Wilson – at last established as the unchallenged leader – to recruit Susaye Greene (b. 13 September 1952, Houston, Texas, USA) in her place. This trio recorded the self-explanatory Mary, Scherrie & Susaye in 1976, before disbanding the following year. Mary Wilson attempted to assemble a new set of Supremes for recording purposes, and actually toured Britain in 1978 with Karen Rowland and Karen Jackson in the line-up. The termination of her Motown contract stymied this move, however.

Since then the use of the Supremes’ name has legally resided with Motown. They have chosen not to sully the memory of their most famous group by concocting an ersatz Supremes to cash in on their heritage, although Terrell, Payne and Laurence later won the rights to tour as Former Ladies Of The Supremes. Payne began recording disco material with producer Ian Levine in 1989, for the Nightmare and Motor City labels. Levine also signed Laurence, Wilson and ex-Supreme Susaye Greene to solo contracts and recorded the trio for a remake of ‘Stoned Love’. Laurence and Payne continued to tour and record in the following decade, reworking several classic Supremes hits, and at the start of the new millennium joined Diana Ross for the poorly received Return To Love hits tour. In 1988, the original line-up of the Supremes was inducted into the Rock And Roll Hall Of Fame.