A lot has already been written about this artist, so I will just include some of his great songs and touch on a few highlights that really impressed me about him.

Very gifted in his ability to write block busting songs, Leon Russell was also a great session pianist and versatile instrumentalist. A man of very few words, he spoke through his music.  [I had the pleasure of seeing Leon live, playing at the Gibson Centre in Alliston, Ontario and he was definitely a man of few words that night.]

We’ve all heard of famous song writing teams like Rogers and Hart, George and Ira Gershwin, Leiber and Stoller, Simon and Garfunkel, and the list goes on… But here we have a songwriter who could put together, not only rich chord progressions and memorable hook melodies, but also very poetic and meaningful lyrics – and 60 years of his career were devoted to this.

His collaborations rank as some of the most successful in music history, and as a touring musician he performed with hundreds of notable artists. He recorded 33 albums and at least 430 songs.

Well you taught me precious secrets of a truth, withholdin’ nothin’
You came out in front but I was hiding
And now I’m so much better and if my words don’t come together
Just listen to the melody for my love’s in there hiding

And I love you in a place where there’s no space or time
I love you for my life, you are a friend of mine
And when my life is over, remember when we were together
We were alone and I was singin’ my song for you

Well you taught me precious secrets of a truth, withholdin’ nothin’
You came out in front but I was hiding
And now I’m so much better and if my words don’t come together
Listen to the melody for my love is in there hiding

—
Leon started playing piano at the tender age of 5 and by the time he was a teenager, he was playing in nightclubs in Tulsa, Oklahoma, where he was too young to even drink (15 years of age).
In the 1960’s Leon moved to Los Angeles, California where he became a sought-after session musician.  He was one of the Wrecking Crew.
He played on tracks by Ringo Starr, Ray Charles, Eric Clapton, The Beach Boys,  the Byrds, Willie Nelson, Dylan, The Rolling Stones and many more.
For a long spell, in the Sixties and Sev­enties, Russell seemed to be everywhere at once with a rambunctious fusion of country grit, big-band soul and Pentecos­tal-church ecstasy, making every singer and player around him sound sharp and funky.
He first shot to fame in the cred­its on other people’s records, most notably as the Musical Director of the mighty R&B orches­tra on Joe Cocker’s legendary 1970 Mad Dogs and Englishmen album and the subsequent tour. 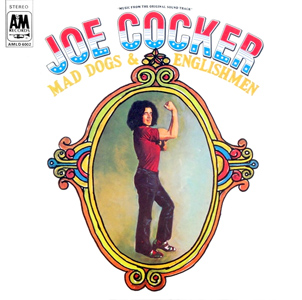 As the “Master of Space and Time” Leon was the conductor of both the music and the energy.

Joe Cocker and Leon Russell with Mad Dogs and Englishmen

On the tour Russell gave some of the women cameras without film in them. He wanted to create a spin that the relatively unknown musicians were all famous by having photographers run around after them with cameras.
Contemporary criticism of the tour accused Russell of having taken advantage of Cocker, using the singer to advance his career. If that is true, then the whole band is guilty, as they almost all went on to bigger things. That is what makes this brief two-month tour a touchstone in music history. It was the moment when these musicians came together to play before they left for the Rolling Stones, Derek & The Dominoes and many of the defining recordings of the 1970s, and indeed of rock music itself.
On the subsequent live album, Russell appeared on the sleeve as a wiry ringmaster with a top hat and a long mane of silver-gray hair, billed as the “Master of Space and Time.”

Russell soon became a big name in his own right, with a superstar-packed debut 1970’s album: Leon Russell, and a Top Five hit, 1972’s Carney. 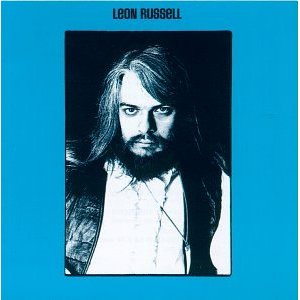 Track 1 / Tight Rope
.
Track 7 / Carney
.
Russell used to casually tell stories that zigzag over his half-centu­ry of rock & roll star time as a songwriter, arranger and produc­er: doing sessions for Dylan, George Har­rison and Frank Sinatra; singing back­up on Ricky Nelson records and playing piano on Beach Boys and Phil Spector hits in the Sixties; writing songs that became standards for Joe Cocker (“Delta Lady”) and George Benson (“This Masquerade”); and cutting solo projects with Eric Clap­ton and members of the Rolling Stones as sidemen.

Elton John has always said in interviews Leon was his favorite, and he helped rejuvenate his career by doing an album in 2010 with him called “The Union”

About the green top hat he used to wear

Leon said that the Byrd’s singer Gram Parsons gave it to him, and he wore it all the time. Once at a party, it was getting thrown around and somebody sat on it, and it started to fall apart. It was at that time, a card came out from the top of it that said, “Al Jolson’s hat from The Jazz Singer.” He didn’t realize that, or he would’ve taken better care of it.
—

As a Leon Lifer, I want to say thank you to the Master of Space and Time.  May you rest in peace and may your music live on.  This is my husband and my song for each other.  We’ve been blessed to see Leon perform it several times — two in the last two years in intimate venues.  Leon reached down and found the words and music to encompass feelings that touch my soul.  My prayer for him is that now that his earthly body is healed and whole that he is singing and playing with all the greats he played with over the decades.