If Elvis Costello has never really been your “cup of tea”, perhaps after reading this post, you may get new found appreciation. This colourful, multi-talented  singer-songwriter is an articulate artist highly regarded by many of his peers as the writer’s writer and the musician’s musician.

To say his work is prolific and runs deep is putting it mildly.  A Discography at the end of this post portrays it all – a steady stream of 30 albums in 33 years.

Regarded by some as perhaps a flashy upstart, Costello is definitely of significance in the history of pop culture. But his innovative, raw talent also extends to acting and being host with pizzazz on several television specials, including filling for David Letterman. 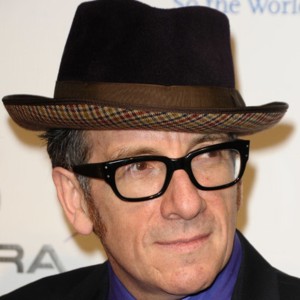 We discovered that his lyrics employ a rich vocabulary with sophisticated wordplay and metaphor. One critic described him as a “pop encyclopaedia”, able to “reinvent the past in his own image”.

The resemblance to Buddie Holly can’t be ignored – He even produced an album called “Buddy Holly on Steroids“.

His music runs the gamut of many diverse genres, beginning with what some call “punk rock”.  For a time, he was nearly very, very famous. To those who love his music, he’s way better than famous: he’s an original. He’s also got the rare ability to create music that is both high-minded and open-minded.

His singing style is explosive and passionate. Over several decades he has written loads of cerebral, tuneful, edgy pop music. But he has never been a superstar in the United States.

Damon Linker, in his The Week article “The chaotic life and career of the great Elvis Costello” opined:

… but for longer than that he has perversely insisted on recording and mixing his records in such a way that his greatest weakness as a performer is consistently accentuated.

I’m talking, of course, about his singing. As anyone who has heard it is aware, Elvis Costello’s voice is not beautiful. A thick, nasal baritone with a wide vibrato, intermittently uncertain pitch, and a tendency to curdle into an aural sneer, it is a classic, unforgettable rock voice — making a virtue of its imperfections to convey emotional authenticity and provoke a cathartic bond with ordinary men and women in the audience.

At least that’s how it was on his early albums, which made sure not to draw undue attention to Costello’s voice in the studio or at the mixing board. Costello’s hectoring, adenoidal singing drew quite enough attention to itself, and it was most effective when it functioned as the lead weapon in the formidable musical arsenal wielded by The Attractions, Costello’s terrific backing band on his best early records.

Costello may be best and most properly known for his stamina as a performer and his enduring prolificacy as a songwriter. “He can toss off an album in an afternoon,” the producer T Bone Burnett, with whom Costello has made a few, says.

This post was compiled with help from Wikipedia and the editors of Encyclopaedia Britannica, trying to cover just some of the highlights.

For more complete details of Costello’s journey, you can check out this excellent link: http://www.elviscostello.info/wiki/index.php/Biography 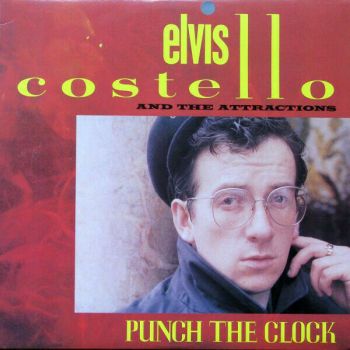 1983 / Shipbuilding /
Written by Elvis Costello (lyrics) and Clive Langer (music), during the Falklands War of 1982. It’s that kinda song which gets under your skin and stays there..the awesome contribution of jazz trumpeter Chet Baker is outstanding !! Originally written for Robert Wyatt, Elvis rewrote it and made it his own.

Declan McManus, as the son of professional musicians, was exposed at an early age to a cornucopia  of contemporary musical expression, including both British and American styles—dance-hall pop, to modern jazz, to the Beatles —from a very early age.

While working in his late teens as a computer programmer and raising a young family, Declan was busy recording demos and performing locally.

In 1974 he fronted a group called Flip City, a band that modeled themselves on the pub rock group Brinsley Schwarz .  The band did a lot of local gigging and in 1975 they produced a demo tape. Here’s a track from one of Declan’s songs, “Pay It Back“.

.
Ignored by every record label in London, Declan formed a strong alliance with Nick Lowe, who had become a noted figure in power pop and new wave (as well as bassist for Brinsley Schwarz)

Lowe took a chance on Declan, bringing him to the attention of Jake Riviera, one of the heads of a new independent label Stiff Records. 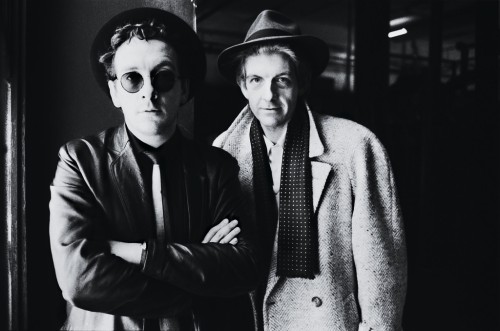 Costello’s first album – produce in 1977 by Nick Lowe: My Aim Is True.

This album is like rock & roll’s greatest amalgam. Costello sported the King’s name, looked and dressed like Buddy Holly, and his music combined the Beatles’ Mersey Beat with punk rock’s indignation and Dylan’s eloquence.

On 17 December 1977, Costello and the Attractions, as a replacement act for the Sex Pistols, were scheduled to play a Costello song “Less Than Zero” on Saturday Night Live.  However Elvis had a different agenda. In imitation of a defiant act by Jimi Hendrix on a BBC show, he stopped the song mid-intro, yelling “Stop! Stop!” to his band, and instead played “Radio Radio” – a song which NBC and Lorne Michaels had forbidden them to play because it criticized the commercialization of the airwaves.

.
Costello was subsequently banned from SNL (the ban was lifted in 1989) but this rebellion worked for him when he received considerable industry attention as an angry young man. His insistence on performing “Radio Radio” on SNL proved a boon to his debut album, and its popularity exploded in the U.S. after that performance.

A critical and commercial success, Costello’s debut album aligned the cynicism and energy of punk bands like the Sex Pistols and the Clash with the structures of a more literate songwriting tradition, weaving complex wordplay through a set of clever pop tunes and moving easily among varied melodic styles.

After the success of My Aim Is True, Costello formed a strong backing band, the Attractions, with Steve Nieve on keyboard, Pete Thomas on drums, and Bruce Thomas on bass.

The full band made their studio recording debut with the March 1978 single “(I Don’t Want To Go To) Chelsea“. From there, the Attractions backed Costello on all of his albums and singles until 1984, with the exception of “New Amsterdam” (1980), a solo single recorded by Costello.

On the early albums with the Attractions—This Year’s Model ( 1978), Armed Forces (1979), and Get Happy!! (1980)—Costello and Lowe developed a distinctive guitar and keyboard mix that was influenced by a variety of 1960s artists, including the organ sound of Booker T. and the MG’s.

From the opening seconds, Costello’s contemptuous snarl leaps off the record, as does the one-of-a-kind whirlwind of Steve Nieve’s emphatic keys, Pete Thomas’ rhythmic pounding, and Bruce Thomas’ pumping bass lines. Again, Costello’s musical dexterity allows him to start a rave on “Pump It Up” and mellow things to a slow dance a song later on “Little Triggers”, his irresistible melodies belying a far more cynical artist than a record ago. Maybe most impressive of all is Costello’s knack for spitfire wordplay on biting songs like “(I Don’t Want to Go to) Chelsea” and “Radio, Radio”. If a put-down comes and goes before anybody realizes, does it count?

The most notable work of this early period—rockers such as “This Year’s Girl” and “Lip Service,” deceptively upbeat pop tunes such as “(The Angels Wanna Wear My) Red Shoes,” and rapid-fire, soul-inflected songs such as “Black and White World”—featured appealing melodic bass lines that complemented an energetic rhythm guitar and a stylized, almost awkward vocal style.

.
Through densely constructed thematic puns, Costello explored the intersection of power and intimacy, often from the perspective of a rejected lover.

By the end of the 1970s Costello was firmly established as both performer and songwriter, with Linda Ronstadt and Dave Edmunds having success with his compositions.

“In very different times, my reaction to having my songs recorded by other singers was downright suspicious, territorial and, at times even a little hostile. To say the least, I lacked grace. Five years ago, shortly before an encore performance of “Alison”, I told the audience at the Hollywood Bowl, that it was Linda Ronstadt’s rendition of that song – which was featured on her big hit album “Living In The U.S.A.” – that kept petrol in our tour bus…”.

1980 / Linda Ronstadt live on HBO / Party Girl / written by Elvis Costello /
.
During the 1980s Costello broadened his range, working with various producers who developed more-layered arrangements. The hit “Everyday I Write the Book” (1983) was composed during this period, and albums such as Trust (1981) and Imperial Bedroom (1982) won critical acclaim.

However, the early 1980s were also a time of creative inconsistency, as Costello experimented with the country genre in Almost Blue (1981) and released Goodbye Cruel World (1984); both albums had only limited critical and commercial success.

In 1985 Costello divorced his wife, and he married Cait O’Riordan, the bassist of the British band the Pogues, the following year. Following his marriage, Costello recorded King of America (1986), a radical stylistic departure. Produced by T Bone Burnett,King of America featured spare acoustic arrangements and a more direct lyrical style.

Costello continued to explore new sounds on his next album, Spike (1989). In both of these works, Costello wrote about the role of the artist in popular culture, blending contemporary cultural imagery with modern and classical literary allusions. He developed a fragmented, dissonant lyrical style; the influence of modern poets such as T.S. Eliot was evident on visionary songs such as “…This Town…” from Spike and “Couldn’t Call It Unexpected #4” from Mighty Like a Rose (1991).

In the 1990s he released a mixed set of recordings, ranging from straightforward well-crafted rockers to experimental works such as the song cycle The Juliet Letters (1993), recorded with a string quartet, and Buddy Holly On Acid (1994).

This was a live Soundboard recording from a concert held at the Foro Italico, Rome concert, 18 July 1994.

Then there was the album Painted from Memory (1998), written with the composer Burt Bacharach. 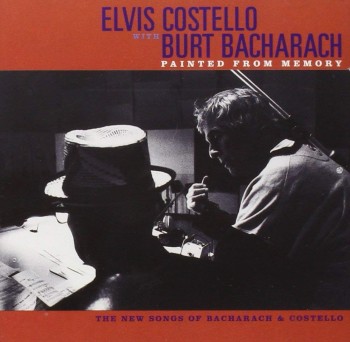 A single from this album, “I Still Have That Other Girl,” won a Grammy Award. Costello continued to develop musically and lyrically and remained one of rock’s most-respected songwriters well into the 21st century.

On 23 February 2003, Costello, along with Bruce Springsteen, Steve Van Zandt, and Dave Grohl, performed a version of the Clash’s “London Calling” at the 45th Grammy Awards ceremony, in honour of Clash frontman Joe Strummer, who had died the previous December.

In March, Elvis Costello & the Attractions were inducted into the Rock and Roll Hall of Fame. He announced his engagement in May to Canadian jazz singer and pianist Diana Krall, whom he had seen in concert and then met backstage at the Sydney Opera House in Australia.

The Spectacle TV Series (2008-2010) was definitely a wonder of musical spectacle, information and really interesting personalities. Each episode of “Spectacle,” his talk-and-jam cable-television program, demonstrated his pluck at taking on every section of the songbook, and in explaining why.

But the most fascinating of artists was the host, Costello, himself. He was so obviously well informed, so patently appreciative of their talents, and so able to relax them into talking candidly about themselves, their colleagues and their music.

In this episode, following Costello’s opening song, check out the exuberance with which he introduces guest Bruce Springsteen.

AS A BIG ASIDE…

One response to “Elvis Costello”