Gary: “When I was growing up in the late Fifties, there was a form of Music that was very popular, called Instrumentals.  They do not exist anymore and that’s sad. Some great musicians and groups we able to gain popularity and notoriety, due to this form of music.

[I found listening to instrumentals quite enjoyable, having an appreciation for patterns of melody, textures of chords, rythms and grooves – and all without having to think about meaning of lyrics, which sometimes made no sense – RS]

In the early Sixties, there was this instrumental group from Hollywood California… 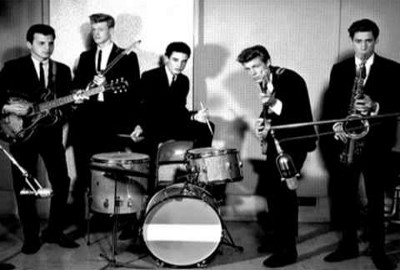 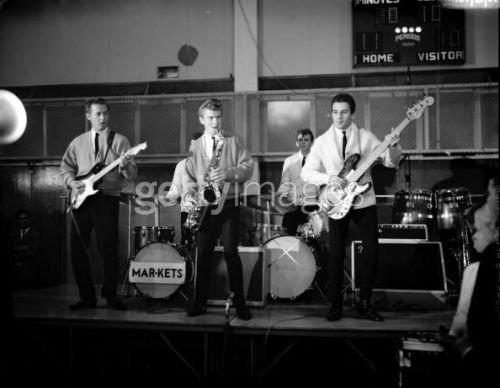 The Marketts are sometimes classified as a Surf group because of their hit instrumental “Out of Limits,” one of the last big Surf singles, which made #3 in early 1964. In reality, they were something of an all-purpose contemporary instrumental group with elements of Surf, Rock, Pop, and even Easy Listening. The “Marketts” were not really a band per se, but a fluid collection of Los Angeles session musicians, working under the direction of producer Joe Saraceno.

Although Saraceno himself did not play or arrange anything on the Markett’s records, or even write all of the material, he was sharp enough to latch onto the Surf craze in 1962 for one of the earliest instrumental Surf hits, “Surfer’s Stomp,” which made the Top 40 on Liberty in 1962. While working at Liberty, he also produced the Ventures for a time, and the influence of the Ventures’ cleanly picked guitar lines is very evident on “Out of Limits” and some other Marketts tracks.

With their blend of surfy guitar leads, film soundtrack horns, and spooky organ, the Marketts’ sound is best described not as Surf, but as rock-influenced instrumental Pop with a futuristic (by early-’60s standards) touch. Many of their songs seemed to be doing their best to evoke space travel and science fiction flicks, sometimes with the help of what sounds like a Theremin. They could be said to have filled the void between Surf music and space age Pop, which is not a criticism; their music is not terribly substantial, but it is fun, and has a pretty good groove.

After “Out of Limits,” the Marketts would enter the Top 20 one more time with the “Batman Theme” in early 1966, and release records as late as 1977. Saraceno, in addition to his work with the Marketts and the Ventures, would also produce Bobby Vee, the Sunshine Company, Martin Denny, and many other acts.~ Richie Unterberger

Our friend, Bill [July 24, 2012 at 9:53 pm], raised an interesting comparison between the TV theme for The Twilight Zone vs the opening measures of Outer Limits.